NASA has discovered what is believed to be plumes of water spewing from the surface of Jupiter’s moon, Europa. 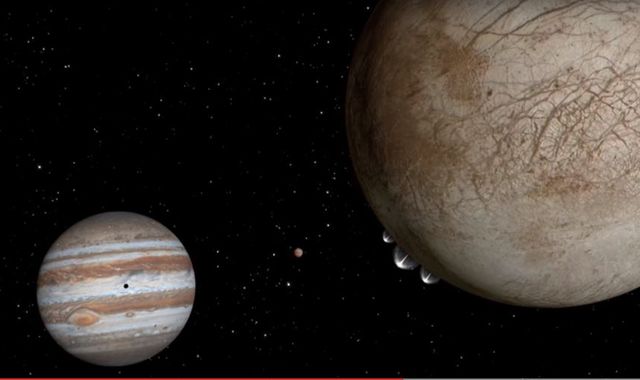 Astronomers made the discovery using the Hubble Space Telescope.

The observation means missions to Europa may be able to take samples from its ocean without having to drill through miles of ice, the US space agency said during a live announcement on Monday.

As Europa’s ocean is considered to be "one of the most promising places that could potentially harbour life in the Solar System", it is a significant finding which could provide "a tantalising opportunity".

Geoff Yoder, acting associate administrator for NASA’s Science Mission Directorate in Washington, said: "These plumes, if they do indeed exist, may provide another way to sample Europa’s subsurface."

Europa’s huge ocean – which contains twice as much water as all of Earth’s oceans combined – is protected by a layer of extremely cold and hard ice of unknown thickness.

The plumes are estimated to rise about 125 miles (200 kilometers) before, presumably, raining material back down onto Europa’s surface, NASA has said.

They saw what could be plumes erupting on three of these occasions.

If confirmed, Europa would be the second moon in the solar system known to have water vapour plumes, after NASA’s Cassini orbiter detected jets of water vapour and dust spewing off the surface of Saturn’s moon Enceladus in 2005.

Scientists may use the infrared vision of NASA’s James Webb Space Telescope, scheduled to launch in 2018, to confirm venting or plume activity on Europa.

The agency announced last year that it intends to send a robotic spacecraft, equipped with a suite of scientific instruments, to circle Europa in the 2020s.

Jupiter, the largest planet in our solar system and fifth from the sun, is surrounded by more than 50 moons.

Coronavirus: No New Cases Or Deaths Recorded On Isle Of Wight Today (Sunday)

Plane Crashes Off The Isle Of Wight

Coronavirus: 199 Confirmed Cases On The Isle Of Wight – A Rise Of One